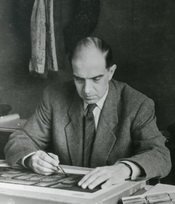 (1901-1956)
Gusztáv Oláh joined the opera in 1921, first working as a set designer and later as a director, spending the last part of his career as the theatre's chief principal director. His work in opera earned him a position among the greatest figures in Hungary's theatre culture. In his capacity as a set designer, he was a representative of the traditional style with which he had grown up and which was fashionable around the world during his active years. Within the limits of this style, however, he produced the maximum degree of artistry, atmosphere and historical accuracy with regard to location. The essence of his work as a director was a meticulous precision and a director's book worked out to the tiniest detail. Just like every great opera director, he worked solely on the basis of the music: he set the movements to the rhythm of the music and its changes in mood. And this is natural, since he was a trained musician and an excellent pianist. For a while, he also directed the Opera's ballet programme, and as principal director he was also virtually the theatre's intellectual leader as well. He was invited abroad quite often, both as a director and as a designer. It was during such a guest assignment that he died, while working on a production of Khovanschchina with conductor Frigyes Fricsay in Munich. As a college professor, he also trained the next generation of directors.