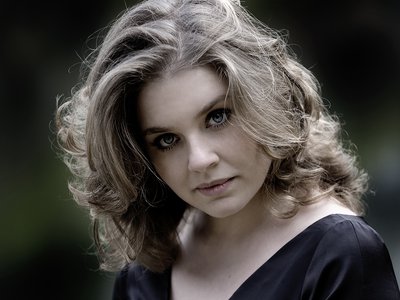 She was born in Budapest into a Hungarian family of artists with Russian roots. She started her international career after winning the famous Geneva International Music Competition in 2009. Since that time she is singing in opera houses and concert halls around Europe. In addition to the first prize, the public prize and three special prizes in Geneva, her talent was also recognized at the ARD Music Competition in Munich with a special prize in 2012. In 2014 she has been awarded with a star on the “Walk of Fame” for her successful Traviata performance in Szombathely, as well as the Hungarian State Opera’s “Székely Mihály Memorial Plaque” for her outstanding professional qualities. She is regularly appearing at the Hungarian State Opera as Mimi, Nedda, Traviata, Micaela and Desdemona for example. She sang Partenope at the Handel Festival in Karlsruhe as well as Woglinde in Wagner’s Ring Cycle at the Grand Théâtre de Genève. She also sang with great success the leading role at the world premiere of György Selmeczi’s Spiritisti as well as Woglinde, 3. Norn and Gutrune at the Wagner Festival in Budapest.She is also internationally well established as a concert soloist singing for example with Radio Della Svizzera Italiana, the Swedish Chamber Orchestra, Sinfonia Varsovia, the Liszt Ferenc Chamber Orchestra, the St. Petersburg Philharmonia, the Budapest Festival Orchestra, as well as the Orchestre de la Suisse Romande. She likes to devote her time to sing song recitals. For example she performed already at the Budapest Spring Festival and the Tonhalle in Zürich; always accompanied by Jan Philip Schulze whom she works with since 2010. Her first portrait album was released in 2010 by the Ysaye Records with songs of Richard Strauss, Shostakovich, Bartók and Kodály. Chamber Singer of the Hungarian State Opera in the season 2016/2017.