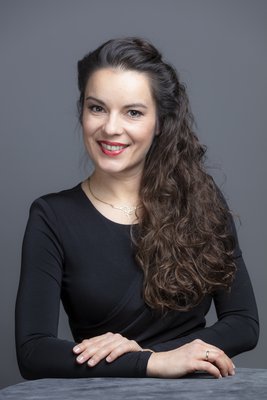 After graduating with honours as a singer and voice teacher from Budapest's Ferenc Liszt Academy of Music, where she had been a student of Erika Sziklay's, Orsolya Sáfár got the chance to gain more familiarity with the stage, under the direction of conductor Géza Oberfrank, as the winner of a scholarship from the Hungarian State Opera's Opera Studio. She also improved her skills at a number of master classes both in Hungary and abroad, including with artists Júlia Hamari, Éva Marton, Yevgeny Nesterenko, Mietta Sighele and Bernd Weilk. Her current vocal teacher, Bernadette Wiedemenn, is a soloist contracted with the Hungarian State Opera.
Sáfár's numerous professional distinctions include winning first prize in the third Jenő Ádám National and International Song Competition before being accepted into the academy. In 2003, for her activities performing and popularising contemporary Hungarian musical works, she received the Artisjus Prize. In 2006, she won a special prize at the Riccardo Zandoni International Singing Competition, and later reached the finals at the Hilde Zadek International Singing Competition in Vienna in 2009. In the early years of her career, she won various state, municipal and philanthropic scholarships.
She made her debut at the Erkel Theatre in 2005 in the role of Oscar in Un Ballo in Maschera, and at the Opera House in 2006 as Zerlina in Don Giovanni. The Hungarian State Opera recognised her talent and activities with the Juventus Prize in 2013, and again in 2015 by awarding her the Gusztáv Oláh Memorial Plaquette. In 2015 she also received a state decoration: the Silver Cross of Merit of Hungary.
Since 2005, she has appeared at nearly every theatre in Hungary where opera is performed, and has been a recurring guest at several prestigious festivals (the Budapest Spring Festival and the Eszterházi Festivities), along with getting the chance to sing roles from opera rarities at the concerts of the Bartók Plus Opera Festival in Miskolc. She has sung in theatres in Vienna, Berlin and Japan, and is also an active concert singer, with a repertoire spanning from the Baroque era to the present and including numerous songs, song cycles and oratorios.