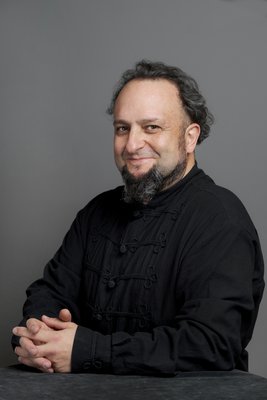 János Szerekován was born in the Transylvanian city of Marosvásárhely (Târgu Mureș), where he started out studying violin. Later, after briefly pursuing other interests, he earned his degree in voice performance. In Budapest, he continued his vocal studies with Boldizsár Keönch, an associate professor at the Liszt Academy. In 2007, he took part in a master class with Thomas Houser, singing teacher at New York's Metropolitan Opera. In 1998, he joined the Târgu Mureș Philharmonic Orchestra Chorus, where he started his solo career with Mozart's Requiem. His next stop was the Hungarian Radio Chorus, where he also started to receive solo assignments within a short time after his 2001 signing. As a chorus singer, he has won the Award of Merit and the Lajtha Award, and in 2014 he won the József Simándy Commemorative Plaque as a soloist with the National Theatre of Szeged. He made his debut at the Hungarian State Opera House in 2003 in the lead role of Rossini's L'occasione fa il ladro. He is a guest singer with Debrecen's Csokonai National Theatre and the National Theatre of Szeged. With his wide repertoire of oratorios, he has performed with numerous fine ensembles both across Hungary and abroad. He has also participated in a number of Hungarian and international competitions, and once took first prize at the Brassó (Brașov) Singing Competition.
His principal roles consist of Don Ottavio (Don Giovanni), Ramiro (La Cenerentola), Count Almaviva (Il barbiere di Siviglia), the title role in Le comte Ory, Nemorino (L'elisir d'amore), Ernesto (Don Pasquale). As far as oratorios are concerned, he also sings the Evangelist in Bach's passions, and his repertoire also includes Messiah, Die Schöpfung and Rossini's Stabat Mater.