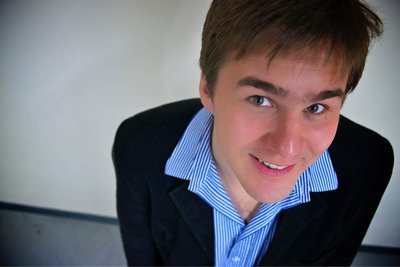 Tamás Tarjányi graduated from the University of Theatre and Film Arts in Budapest in 2007 after studying musical acting in a course taught by directors Tamás Ascher and Eszter Novák. He also began his vocal studies there, with Zsuzsa Domonkos and Éva Bátori his first singing teachers. He then continued his education at the Liszt Academy of Music for two years under the tutelage of Magda Nádor, later completing his studies with honours at Vienna's University of Music and Performing Arts, where his teachers were Margit Klaushofer and Robert Holl. He made his professional debut as a musical actor at the Budapest Operetta Theatre in 2007, and as an opera singer in the role of Burlotto in a production of Haydn's Le pescatrici at the Zemplén Festival, later singing the role of Tamino in the Hungarian State Opera's production of The Magic Flute in 2010. In 2012, he took the stage at Vienna's Theatre an der Wien in the role of Anfinomo in Monteverdi's opera Il ritorno d'Ulisse in patria. Since 2012, he has been a member of Theater Bonn, where his principal roles have included Aeneas (Dido and Aeneas), Don Ottavio (Don Giovanni), Tamino (The Magic Flute), Jacquino (Fidelio), Count Almaviva (The Barber of Seville), Nadir (Les pècheurs de perles), Pang (Turandot), Narraboth (Salome), Lampwick (J. Dove: The Adventures of Pinocchio), and Third Angel/John (G. Benjamin: Written on Skin). He makes frequent appearances at the Hungarian State Opera, where audiences have thus far seen him in the roles of Tamino (The Magic Flute), Don Ottavio(Don Giovanni), Fourth Squire (Parsifal), and as Man in Woollen Shirt (János Vajda: Mario and the Magician). The 2014-2015 season featured him singing Ferrando (Così fan tutte) and Count Almaviva (The Barber of Seville) at the Opera House and at the Erkel Theatre.