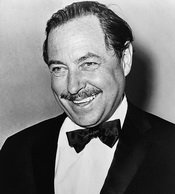 (1911-1983)
Playwright Tennessee Williams was born on March 26, 1911, in Columbus, Mississippi. After college, he moved to New Orleans, a city that would inspire much of his writing. On March 31, 1945, his play, The Glass Menagerie, opened on Broadway with great success. Two years later, A Streetcar Named Desire opened, surpassing his previous success and cementing his status as one of the country's best playwrights. The play also earned Williams a Drama Critics' Award and his first Pulitzer Prize. His subsequent work brought more praise. The hits from this period included Camino Real, Cat on a Hot Tin Roof and Sweet Bird of Youth. Many of Williams' plays have been adapted to film starring screen greats like Marlon Brando and Elizabeth Taylor. Williams died in 1983 in New York.