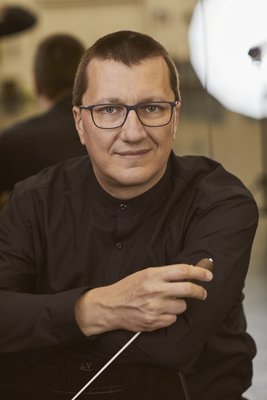 Thomas Herzog has been ballet conductor at Theater Basel since 2014, where he has collaborated closely with choreographers like Stephan Thoss, Stijn Celis, Johan Inger, Pontus Lidberg, Jeroen Verbruggen and Richard Wherlock in more than a dozen productions. He also returns regularly to conduct ballet performances at Semperoper Dresden and the Hungarian State Opera.

The Swiss born conductor with Hungarian roots has been a regular guest conductor over the past 10 years with the Wuertemberg Philharmonic in Germany, the Basel Symphony and the Basel Chamber Orchestra in Switzerland; the Szeged, Szombathely and Miskolc Symphony Orchestras in Hungary and the Montevideo Philharmonic in Uruguay.

Thomas studied percussion, composition and conducting. In 1997, he won the First Prize in the Concours pour jeunes compositeurs held by the Lausanne Chamber Orchestra. Various Radio broadcasts bear witness to his gifts as an interpreter of contemporary music. From early on he has also devoted himself to Spanish music, especially the zarzuela repertory.