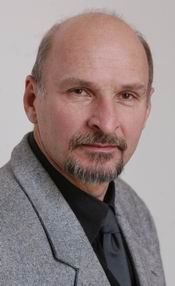 He was born in Herend in 1955, both his parents were artists. He attended music school and secondary school in Veszprém, where he learned to play the violin, and later singing. He sang in the Honvéd Male Choir in 1974/75. He studied singing, music teaching and opera singing at Liszt Ferenc Academy of Music between 1975 an 1982. His teachers were Boldizsár Keönch and Yevgeny Nesterenko.

He debuted at the Hungarian State Opera House in 1981 in the role of Jack in Porgy and Bess. He joined the company of the Opera House in 1982. His first major success was the role of Bartolo in Il barbiere di Siviglia revived by András Békés in 1986. Since then he has become notorious for his renditions of many successful and thoughtfully performed roles including Wozzeck, Scarpia (Puccini: Tosca), Cipolla (Vajda: Mario and the Magician), Alberich (Wagner: Der Ring des Nibelungen). He has also been active as an opera director since 1990. He was decorated with the Liszt Award in 1989. He received the Mihály Székely Commemorative Plaque in 1992.