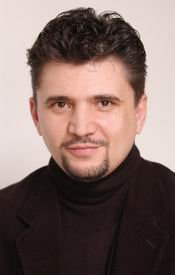 He began his singing studies in his native town Püspökladány, and later he joined the company of the Csokonai Theatre, Debrecen. In 2001 he signed a contract with the Szeged National Theatre for Classical and Modern operas and bon vivant roles. In the same season he sang in the Budapest Operetta Theatre as a guest singer, and a year later he joined the company. He made his debut in the Hungarian State Opera House in the role of the Groom in Sándor Szokolay's Blood Wedding in 2003. He has sung as a guest singer in Austria, Germany, the Netherlands, Japan, Russia and the United States. His repertoire includes operas by Mozart, Rossini and Donizetti. He regularly appears in concerts in Munich, Tokyo, Tel Aviv and Canadian cities. In the Opera House, besides many minor roles, he has sung Ramiro (La cenerentola), Otto (Bánk bán) and Ferrando (Così fan tutte).