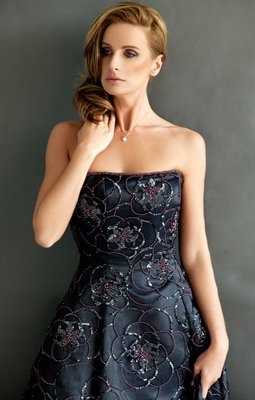 Éva Várhegyi graduated, first as a voice teacher in 1996 and then as an opera singer in 1988, from the Ferenc Liszt Academy of Music as a student of Zsolt Bende, Dénes Gulyás and Balázs Kovalik. She has been a soloist for Hungarian Radio since 1997 and for the Hungarian State Opera since 1998. With her principal roles including The Composer, Xerxes, Dorabella, Cherubino, Carmen and Prince Orlofsky, she twice took first place at the National Singing Competition, 1991 and 1997. In 2000, at the Fifth Budapest International Singing Competition, she won in the role of Stéphano for the contest held for the different roles in Gounod's Roméo ét Juliette, a part which she also sang in Kiev and Ludwigshafen, in Germany. She has participated in master classes held by Nicholas McGegan, Júlia Hamari, László Polgár, Ilona Tokody, Helmuth Rilling, Vera Rózsa and Larissa Gergieva. She has performed as a guest in England (Ariadne auf Naxos), Japan (Die Fledermaus), Finland (Der Rosenkavalier), Munich (in Pietro Torri's Melissa in Grecia) and Kiev (Roméo and Juliette). She has twice won both the Annie Fischer and Budapest Friends of the Opera scholarships. Finishing among the winners at the International Monteverdi Singing Competition in Verona in 2007 led to her performing one of the leading roles in Monteverdi's opera L'Orfeo in both Verona and Mantua. She has regular been featured at the Wagner in Budapest Opera Festival conducted by Adam Fischer at Müpa Budapest.