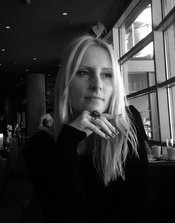 Music has long played the leading role in Ágnes Zászkaliczky's life. She was six years old when she took up the piano at Szentendre's Vujicsics Tihamér Music School, and she later gained admission to the organ programme at the Béla Bartók High School of Music. Her organ teacher was Lilla Szathmáry, and she also took piano lessons with Gábor Csalog. She enrolled in Daniel Chorzempa's master's programme at Salzburg's Mozarteum in 1998 and graduated with a degree in organ performance in 2004. Following this, she went to Finland to work as a cantor in a Lutheran church in Lappeenranta. She became the artistic director of the Nagyvárad (Oradea) International Organ Festival in 2006 and the next year released her first album, featuring works written for organ and cello that she performed together with Tibor Bogányi.
Drawing and painting were also a constant presence in her life, but these only took on a central role later, after a visit to Saint Petersburg. In 2009, she started studying painting with the teachers of the city's Repin Academy. Her first solo exhibition was held in Szentendre in 2001, and since then she has had showings in Budapest, Vienna, Helsinki and Palm Beach, among other locations. A member of the Association of Hungarian Fine Artists since 2016, she is particularly interested in portraits of musicians. She has also worked as an illustrator, including for the book Palace of Delights – 100 Hungarian Children's Songs and the cover design Daniel Gottlob Türk's volume of music Childhood Years, both published by Rózsavölgyi Kiadó. Since 2008, she has also been engaged in creating the visual designs for large-scale musical works. One such project is the Hungarian State Opera's unique autumn 2018 production of Carmina Burana, for which Zászkaliczky and Bogányi are the co-artistic directors.